We detected that you're using an older version of Internet Explorer. please upgrade IE 11 or later

Alternatively, you can install and use these secure and newest browsers: Chrome | Firefox | Safari for MacOS | Edge for Windows 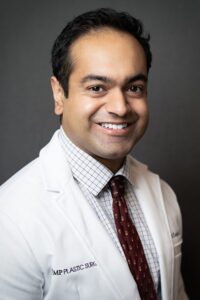 Dr. Sri Kurapati, or “Dr. Sri” as he is known to his patients, has spent the last ten years honing his skills in Plastic Surgery. He is a specialist in Reconstructive Surgery with a special focus in Hand and Upper Extremity as well as Breast and Body Contouring.

Dr. Sri grew up in the beautiful rolling hills of West Virginia. After high school, he earned a Bachelor of Arts in Economics and a Bachelor of Science in Premedical Studies at the University of Dayton. While there, he played NCAA Division I tennis and was active in several art competitions. He then continued his training in the Buckeye state to complete his Doctorate of Medicine and Masters in Business Administration at the University of Cincinnati College of Medicine and Lindner College of Business. He then completed his first residency in General Surgery at the University of Pittsburgh Medical Center/Mercy Hospitals in Pittsburgh, PA. It was there that he discovered his passion for Plastic Surgery, which spurred him to pursue his second residency in Plastic and Reconstructive Surgery at the University of Alabama Birmingham. Afterwards, he completed an additional specialization in Hand and Upper Extremity Surgery at Baylor College of Medicine Department of Orthopedics in Houston, TX.

Through Dr. Sri’s extensive medical training, he has seen patients in General Surgery, Plastic Surgery and Orthopedic Surgery. He excels in partnering with patients to achieve their goals of being the best version of themselves.

In his spare time, Dr. Sri loves to play tennis and loves to dabble in oil and acrylic painting. He approaches Plastic Surgery as a union of art and science and is very much looking forward to providing the best care possible to his patients in Fort Worth.

Wouldn’t go anywhere else for my Botox and filler! An amazing Dr with and gentle touch.

Dr. Pekarev and his office personnel are awesome, friendly and caring. I would highly recommend his services to anyone. He is very knowledgeable in his field of practice.

Please be aware that this is not a secure email network under HIPAA guidelines. Do not submit any personal or private information unless you are authorized and have voluntarily consented to do so. We are not liable for any HIPAA violations. Understand that if you email us, you are agreeing to the use of an unsecured method and understand that all replies will be sent in the same fashion, which you are hereby authorizing.

By checking this box you hereby agree to hold MP Plastic Surgery, including its doctors and affiliates, harmless from any hacking or any other unauthorized use of your personal information by outside parties.

By checking this box, you also agree to receive email communication from MP Plastic Surgery, including its doctors and affiliates.